The number "38" was chosen because, (as past treasurer Eric Immesberger put it), it was an easy number to remember because of the comparison with the .38 caliber revolver.

Things were challenging at first.  Al Lombardo was our first lodge president.  The vision of the lodge was to keep the members informed and grow.  We sent notices out with postage money out of our own pockets.  We had meetings in the office with donated chili from the local Wendy's or hotdogs with the fixings from Pathmark.  We were able to send our one delegate, Lodge VP Mike Nied, to the State Conference in 1990 because we felt that an informed lodge would result in an informed member.

Our membership numbers began to increase, with more DA investigators joining and subsequently Court Officers, Correction Officers, NYPD, Federal Agents, T&LC Officers, parks, parole & probation officers and many more...these were officers we met in our day-to-day job function that we spread the word about the FOP to.  It has always been our belief that diversity in membership titles is the secret to success because these are the officers you deal with all the time.  It only made sense to share the FOP with them.

Over the years, we've shared quite a few laughs. Al Lombardo, Mike Nied and Steve Palermo driving through the night to a National Conference in Pittsburgh and almost running into a ditch, sitting around at Board meetings to fold newsletters or prepare things for the Children's Christmas Party...and have shed many a tear, losing our brother Steve Basick and other dedicated and involved members which has left a void in our hearts.

Community and charity work is very important in our lodge, and we have certainly stepped up over the years with our involvement with scores of charitable events and undertakings: Halloween treats or Easter/Passover baskets to children confined in area hospitals, donating school supplies to underprivileged  kids, bestowing scholarships, collecting and donating food to neighborhood pantries, officers in need, Toys for Tots, Guide Dog Foundation, American Cancer Society, National Peace Officers' Memorial, WTC Disaster relief Fund, Alzheimer's Association, Hemophilia Association, Special Olympics, Law Enforcement Torch Run, National Institute for People with Disabilities and many others. We've given U.S. Savings Bonds to members who have given birth.  We've sent our members flowers and Mass cards when they've been injured, ill, or had lost a family member.

We celebrated our twentieth year as a chartered lodge in 2009 with a Dinner Dance. We've grown from 22 original members in 1989 and having only 1 delegate in the 1990 State Conference to having one of the highest delegate counts at the 2012 State Conference.  In 2013  we sent 16 delegates to Cincinnati Ohio for the 61st Biennial Conference of the Grand Lodge FOP!  Our delegate count is based on our total membership and our commitment to duty ensures that our voice is heard and our ledge remains strong on both the State and National levels.

We are looking forward to continuing the fine tradition of fraternalism in New York State.  Lodge 38 prides itself on some very simple rules:  the member always comes first, never take anything for granted, keep members informed and involved...then and only then, will you keep members!

Come back soon. We are in the process of updating our lodge history.

Lodge 38 had a very humble beginning back in November 1989.   Twenty-two Detective Investigators in the Kings County District Attorney's Office got together with the desire to start an FOP lodge.  Many in law enforcement were not even aware that an investigator for a district attorney's office had "police officer" status.  A charter was applied for with the State Lodge and approved, and FOP New York Lodge 38 was born! 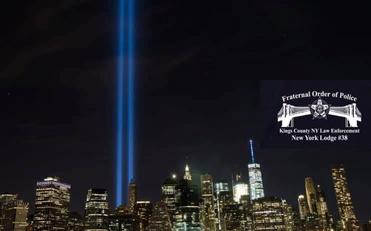